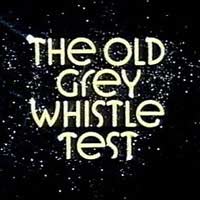 It became the most influential music television show of the 1970s. Where radio had John Peel and Top Gear, there was no viewing equivalent for anyone interested in more serious music, the type of thing that was unlikely to make it to the charts and Top of the Pops. That all changed in 1971 when the mysteriously-named Old Grey Whistle Test hit the air.

The name came from Tin Pan Alley, according to one report. Old greys were acetates of songs and the big test was if you could whistle the tune. But there was little to whistle on the show, with its emphasis on the progressive element of rock. Produced on a very limited budget, a total of £500, which included fees for the artists, it was very much on a shoestring, with bare sets, a style that lasted until it all ended in 1987.

The programme's longest running host was Bob Harris, a former policeman nicknamed "Whispering" for his soft-spoken style. Until 1978 he introduced and interviewed the acts, loved and derided in equal parts. But, in the early years at least, he had genuine love and respect for the artists, and treated them with reverence.

However, although music changed in 1976 with the advent of punk, the programme didn't, until 1978 when Harris was replace by Anne Nightingale. But that was the beginning of the end. Over the next nine years there were another four presenters and a name change - it became simply The Whistle Test in 1983.

The show got the best and the brightest, from John Lennon and David Bowie to Bob Marley and the Wailers. But, in reality, they'd take almost anyone who was available and because they were the show for serious music lovers, could help break some fairly unknown acts, as they did with the Dutch group Focus.

Unlike Top of the Pops, the artists really had to play live in the studio and that gave them a great deal of freedom - there were few restrictions as to how long they could go on. That made for some electrifying performances, the best of which were collected, much later, on DVD.

Punk got relatively short shrift on the show, especially from Harris, who made no secret of his distaste for it. By the time the show finally caught up with it, punk's heyday had passed and although it tried hard to be relevant during the 80s, it never managed to find the new pulse of young, serious record buyers.

By the time it came to an end, the Whistle Test had run its course. The form was too slow for the time, outdated and old-fashioned. It needed to be replaced by something totally different.

But for much of the 1970s it had been the perfect programme, the utter opposite of Top of the Pops. The simple presentation of the music put the emphasis on sound rather the image, which was exactly what was needed, to give the music a real credibility.

It was an important, vital show that laid the groundwork for all the shows that followed and changed the way people saw and considered music.

New Wave Music in The 70s
Share Your Story, Join the Discussion or Seek Advice..
It's funny how clips from OGWT still show up regularly on BBC4 music documentaries, a sign of just how influential and long lasting the show was. Most bands of stature played on the Whistle Test, and it covered all genres, even if Bob Harris made no secret of his hatred for punk. I doubt even Later...has had quite as much influence, especially as it came in a period when there was no music on TV except TOTP.
oldpunk - 30-May-12 @ 1:37 PM
Title:
(never shown)
Firstname:
(never shown)
Surname:
(never shown)
Email:
(never shown)
Nickname:
(shown)
Comment:
Validate: