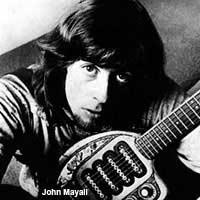 It was only really after World War II that people in England began to hear the blues, on records brought back by sailors and music broadcast on the Voice of America radio. It found a small but eager audience that grew a little as bluesmen like Josh White and Big Bill Broonzy toured Britain in the 1950s. But it was only towards the end of the decade that a homegrown blues scene began to develop, and no one could imagine its eventual impact on music.

The two key figures in the foundation of British blues were Alexis Korner and Cyril Davies. Together, they began playing skiffle, but their hearts were in the blues. In the late 1950s they began playing the music they adored at a London club, and found themselves attracting a hardcore of fans, even as they hosted American legends like Muddy Waters. Musicians coalesced around them, like bassist Jack Bruce, saxophonist Dick Heckstall-Smith and several others, all of whom shared their passion. The pair went their separate ways in 1961, leading their own bands. While Davies concentrated more on making music, Korner continued to run a club, and it was through him that the Rolling Stones first came together.

Korner served almost as a clearing house for musicians, and very supportive of young talent like Paul Jones (who'd join Manfred Mann) and many others - but Davies, too, brought on youngsters in his group, and, between them, they helped nurtured a generation of British blues players.

Born in Manchester, Mayall was a blues aficionado and genuine eccentric; after a stint in the army, he took to living in a tree. But once finally in London, the multi-instrumentalist proved to be a cradle of talent through his Bluesbreakers group. Eric Clapton, Peter Green (Fleetwood Mac) and Mick Taylor (Rolling Stones) all passed through his band, but they were just the biggest names; plenty of others emerged from this incubator.

The truth is that without Mayall, Korner and Davies, much of British rock simply wouldn't have happened. The blues bands those three led gave young musicians a chance to develop their skills whilst playing the music they loved.

From its humble beginnings, there was a blues boom of sorts during 1967 and 1968. It didn't set the pop world on fire, but as music became more adventurous, it became a big part of the musical lexicon, as it was, in essence, very basic - just three chords - but offered the chance for almost endless experimentation.

It was also the start of the age of the guitar hero, and those who had the skills were the players who'd come up through the blues bands, where they'd had chance to improvise. So instrumentalists like Clapton, Jimmy Page and Jimi Hendrix, all of whom knew the blues, became the icons of the era. The blues boom ended, in large part, because music continued to develop, and fashion moved forward from blues to other styles. But blues had a huge influence on heavy rock - it's hard to imagine Led Zeppelin without blues, and even Black Sabbath began as a blues band!

Although it was the electric players who got the fame, there was also a very vital acoustic blues scene that ran as a parallel to the country's folk scene. Clubs grew up in many places - Bristol, Reading, London, Yorkshire, Glasgow, Wales, everywhere - and found receptive crowds. The scene brought forth some excellent artists, such as Mike Cooper of Jo-Ann Kelly, who were the equal of any group from America. But like the electric blues boom, it was short-lived, lasting from around 1966 to 1969, when the audiences dwindled and most of the clubs closed.