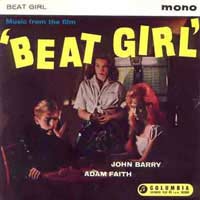 By 1956, American rock'n'roll had gained a foothold and fans in Britain. Skiffle was fine, but rock had power and literally, electricity. It was inevitable that a number of young men would try their hands at it, to create a home grown form of the music and the record companies were all eager to have a slice of the profits to be made from a young market. The British rock boom centred around London (although there were probably many fledgling rock artists from the provinces, next to none made the big time), where the music business was headquartered.

Tommy Steele had been playing guitar before rock arrived, but making his living as a steward on a Cunard liner. His break came when, at home in London for a month, he sat in with the Vipers band at the 2I's coffee bar in Soho - skiffle's epicentre. He was discovered by men scouting for talent and Tommy Hicks, as he was then, suddenly found himself on the fast track to fame. Within two months, Tommy Steele, as he was now known, had been signed by Decca and in October 1956 released his first single, "Rock With The Caveman," that hit number 13 in the charts - the first real British rock single.

Within months he was on television, with the new 6.5 Special and before 1957 had ended, he'd even starred in his first movie, the dubiously autobiographical 'The Tommy Steele Story'. However, it seemed as if his heart wasn't in it and by the turn of the decade he'd moved to the West End, where musicals like Half A Sixpence transformed him into a showbiz star.

Terry Nelhams was mad about movies, not music. But he was bitten by the skiffle bug, formed a band and by 1957 had a residency at the 2I's. He was spotted by Jack Good, who was directing a broadcast of 6.5 Special at the coffee bar and who helped groom him - including changing his name to Adam Faith.

A couple of early singles flopped, but he was rescued by bandleader and composer John Barry (who would later become famous for composing the James Bond theme), who got Faith on three episodes of a new TV show, Drumbeat. From there it was a short step to a new song, the Buddy Holly-influenced "What Do You Want?" and third time was lucky. It hit number one, selling 50,000 copies a day at one point and truly began his career.

Yet it wasn't all smooth sailing. He made an X-rated film and had one song banned because of its lyrics. However, he rode past that and with his first LP, Adam spent 36 weeks in the Top 20. He proved to be one of the few early rockers to last into the beat group era, recording until 1967, when he turned to acting full-time.

Reginald Smith was 18 and singing in Soho's Condor Club when he was spotted by Larry Parnes, the great impresario of the time. Renamed Marty Wilde, he was signed to Phillips Records. But it wasn't until his fourth single, "Endless Sleep," that he finally cracked the charts.

Touring regularly and hosting yet another TV show, Boy Meets Girls, he received plenty of exposure and a few hits. But he never clicked quite the way others did. By the time the Beatles arrived on the scene in 1962, he'd moved into cabaret.

Harry Webb, who was born in India, had a skiffle band who were performing at the 2I's when they were discovered. They'd achieved a little success, even finding gigs outside London, but skiffle was fading fast and rock had much more appeal. So re-naming himself, Cliff Richard, he and his band turned to rock.

His first hit, 1958's "Move It" was originally meant to be a b-side, but it created such a sensation when performed on TV that it looked as though Britain had its own version of Elvis. More hits and the inevitable films (including Expresso Bongo) followed, as Cliff made the transition from rocker to pop star, with a six-month residency at the London Palladium and a group that included the man who'd become the country's first true guitar hero - Hank Marvin.

Although the Beatles wiped out most of the early rockers, Cliff not only survived, he prospered like never before to become a national institution.

There were several other names from the times, like Joe Brown, but only one was a major contender, Liverpudlian Billy Fury (who was born Ronald William Wycherley). He played skiffle, but loved the country music of Hank Williams and began writing his own songs. His mother was supportive, even writing to impresario Parnes, who agreed to meet him in Liverpool when his latest package tour stopped there.

Parnes was so impressed that he put the lad on the bill that same night as Billy Fury and arranged for his first single, "Maybe Tomorrow," to be released in 1959. Fury saw himself as a rocker, but the label wanted ballads - so he sang them. He scored quite a number of hits and kept his career going until 1966 - one of the most successful early rockers, although strangely forgotten since. Problems with his heart since childhood often troubled him and he died in 1983.

Lonnie Donegan
Share Your Story, Join the Discussion or Seek Advice..
Yeah, all these artists played a part, but they were showbiz more than rock'n'roll. Look at what they did - Adam Faith went to acting, Cliff abandoned rock for pop as soon as he could. Only Marty Wilde held true, and even he veered towards country. Really, the best early British rockers in this country were Johnny Kidd and the Pirates - even today, "Shaking All Over" stands as a classic.
shakeit - 30-May-12 @ 2:02 PM
Title:
(never shown)
Firstname:
(never shown)
Surname:
(never shown)
Email:
(never shown)
Nickname:
(shown)
Comment:
Validate: