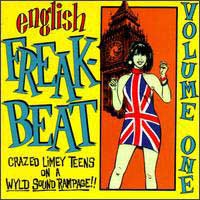 A lot of people don't know the term freakbeat, and it's certainly unusual. It's one used by record collectors, especially in the US, to describe the brief period of more experimental pop that led into psychedelia - a sort of garage rock era. It was often primitive (indeed, one of the bands was called the Primitives), with a foundation in blues and R&B, but it was a vital cog in moving music forward.

The Troggs were the most successful of the freakbeat bands, having huge hits with songs like Wild Thing and A Girl Like You. There was absolutely nothing sophisticated about the music; it was as basic as you could get, but it resonated widely, making the charts not only at home, but also in America.

They enjoyed a brief window of fame, but as the tastes of the public grew more educated, their time in the sun was very limited. However, Wild Thing has gone on to become one of the most-covered rock songs ever, an anthem that's still in wide circulation.

Although the name Them isn't greatly remembered, their lead singer is still a star - Van Morrison. They emerged out of Northern Ireland in the mid 1960s, the top R&B band there, and eager to become better known.

On the mainland they signed with Decca and went into the studio. Their first single flopped, but a cover of the blues standard Baby Please Don't Go hit, as did Gloria (which has also become a rock classic), but none more than Here Comes The Night.

The band went through a couple of incarnations before finally calling it a day in 1966, after which Morrison moved to America and began a long solo career on a high note, with the classic Brown Eyed Girl.

If any group defined freakbeat, it was the Pretty Things. With their extremely long hair, scruffy appearance and attitude, they made the Rolling Stones seem tame - no mean feat. But they still had a string hits like Don't Bring Me Down and Rosalyn, all thick, dirty swathes of R&B, rawly played.

Formed around the same time as the Stones, their career would take a vastly different course. They were one of the few able to move on from freakbeat, and their biggest fame lies with releasing the first rock opera (S.F. Sorrow, which pre-dated the Who's Tommy). They survived the rest of the 1960s and 70s in great style, issuing a series of excellent albums until 1980, when they broke up. In the 1990s they re-formed and even brought out some new material.

Of all the bands that came within the general circle of freakbeat, the Move, from Birmingham, achieved the biggest success, due in large part to the catchy pop writing of Roy Wood. Songs like I Can Hear The Grass Grow and Night Of Fear were hits, but stood well outside the pop mainstream, and their stage act, which sometimes included chopping up TV sets, earned them a notorious reputation. But true infamy came when they sent out nude postcards of Prime Minister Harold Wilson to promote the single Flowers In The Rain (the first song played on Radio 1). However, in spite of that, the hits continued, before they eventually morphed into ELO (Electric Light Orchestra) in the early 1970s.

Freakbeat was essentially the bridge between the beat groups and psychedelia. It was an adventure, albeit a brief one. Its influence, certainly among musicians, was widespread, although it's only in retrospect that it's been seen as any kind of movement.