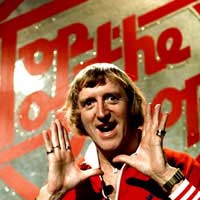 During the 1950s television had been very kind to rock'n'roll. They were both young forms, finding their way, both experimenting. But by the time the 1960s had fully arrived, television was a fully established medium and becoming more resistant to change. Even the advent of the Beatles couldn't change that - at first.

Top Of The Pops

Top of the Pops (affectionately known as TOTP) was the chart show, where viewers could see artists in the studio miming to their hits. When it began in 1964 it seemed like something of a revolution, in part because there was so little pop music on the radio. For many years it was the pre-eminent pop show on TV.

It had all the top names, both British and American - even the Beatles were regular guests. Hosted by disc jockeys (some of whom were known from Radio Luxembourg, the BBC's pop competition), it presented a rundown of the top-selling singles of the week, who'd moved up or down, and who seemed likely to be in the Top 20 next week.

For bands it was perfect promotion, giving exposure to millions. For many in the audience, it was as close as they'd ever get to their idols, and for those in the studio audience, it was heaven. The record companies loved it for free publicity, and the BBC discovered the show had wonderful ratings.

It wasn't until the 1980s that viewing figures started to decline, as more music shows appeared and music became much more diverse, and the emphasis on the charts grew less and less. For bands, an appearance on the show was less important than it had once been (over the years some groups had refused to appear).

As TOTP's primacy vanished, its time slot was moved around, and with the rise of the MTV, it became even less vital, as videos became the main visual music form, and readily available. The show's death knell was sealed by the Internet, where it became so easy to share music and videos, and in 2006 the final episode aired.

Hosted by David Jacobs, Juke Box Jury was a panel show with a difference - the guests would listen to a new record and decide if it was likely to be a hit or miss. It had actually begun in 1959, but only gained popularity as the 1960s progressed, given a desirable early Saturday evening slot by the BBC. The panel was usually made up of celebrities, many of whom had little to do with pop music, but it did spawn the catchphrase "Hit or Miss?". Having a record on the show, even if it was voted a miss, was a huge boost to sales, and twice bands did appear as the "jury" - both the Beatles and the Rolling Stones gave their opinions on new singles.

It lasted until 1967, by which time the format seemed stale and tired. There were two attempts to revive it, but neither caught the public's interest.

Lasting from 1963-1966, this was the hippest of the music TV shows. Guest performed in the studio (miming until 1965 - after that they played live), and they attracted the biggest names. It also made a star out of Cathy McGowan, a London teenager who became one of the hosts, and was always at the height of new fashion, an icon for girls all over the country.

The show also gave a break to Donovan, then a young singer-songwriter without a recording contract, who quickly found himself a star after his appearances. But he was rubbing shoulders with all the pop greats of the time, from the Beatles on. Nor was the show afraid to try and break other new talent, whether English or American - Jimi Hendrix was a prime example; unknown before he appeared, his gigs sold out after he'd been a guest. After the performances became live, it was even possible to see musicians sitting in with each other on songs, giving unique performances.

It had a sense of excitement and spontaneity, which made it seem very much a teen show - but that was its audience, after all. It even spun off a pop talent show, which didn't work. But by 1966, as pop was changing to rock, it was decided to axe the show before it became too dated.

What Was Merseybeat?
Share Your Story, Join the Discussion or Seek Advice..
Really, the only one of those shows to veer away from the pop hits was Ready Steady Go!, which had some unusual people on, like older bluesmen who were touring the UK at the time. They brought some strange things in there and showcased a few artists before they were big, or who'd never have real success, so more power to them. They really attempted something different.
rich - 30-May-12 @ 1:53 PM
thanks for this page, but there is one glaring error on it. "I'll give it foive" wasn't Juke Box Jury, that was "hit?" or "miss". "I'll give it foive" was said by a lady called Janice Nicholls and she appeared on a show called "Thank Your Lucky Stars", cheers
adam morris - 10-May-11 @ 2:34 PM
Title:
(never shown)
Firstname:
(never shown)
Surname:
(never shown)
Email:
(never shown)
Nickname:
(shown)
Comment:
Validate: