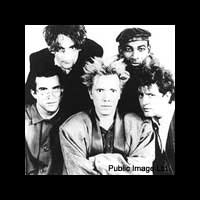 By its very limited musical nature punk had a fairly short shelf life. The bands had to grow or die, and most of them died. However, that created a vacuum, and in its wake stepped the darker aspect of post-punk music. It took the short sharp shock of punk as its springboard, but offered greater musical complexity and a much bleaker personal vision.

Probably the first post-punk record, aptly, came from a former Sex Pistol, as Johnnny Rotten (who’d reverted to his proper name of John Lydon) formed Public Image Ltd. (or PiL) and released an eponymous single that was a rich swathe of layered guitars and deep bass topped by some very angry, snarled vocals. There was none of the rhythmic drive, or the anthemic choruses, that had categorised punk. This was quite deliberately more abstract and deep. Their self-titled first album continued the raw clash of sound, which reached its zenith on the frequently dissonant Metal Box (1979). From there, curiously, the group slowly became more accessible, working towards more of a dance style to spread Lydon’s acidic message. The band’s career spanned nine albums, lasting until 1993, when Lydon finally pulled the plug on PiL.

If one band was truly emblematic of the post-punk era, it was Joy Division, named for those forced into prostitution in the concentration camps of Nazi Germany. Originally titled Warsaw, they’d been an early Manchester punk group, but with a new name and denser sound they seemed to find their art. Their first album, Unknown Pleasures, found bass guitar taking a lead role in the dense songs, and singer Ian Curtis’ lyrics talking about isolation, both emotionally and socially. Their live shows could be haphazard, as Curtis suffered from epilepsy and sometimes had fits on stage. Perhaps their greatest musical moment, though, came with the single Love Will Tear Us Apart, which even hit the charts and presaged their much-anticipated second album, Closer. By the time that disc arrived, however, the band was no more; on the eve of an important American tour, Curtis committed suicide. The rest of the band regrouped as New Order, going on to enjoy huge international success in the 1980s and 1990s – but with a completely different sound.

Formed at Leeds University, the Gang of Four attempted to weld socialist rhetoric to scratchy, jagged funk. Regard by many as one of the seminal bands of the era, they weren’t easy listening (but then, few of the post-punk bands were and never wanted to be), with vocals that could almost be political exhortation and scratchy, skittering rhythms. It was an unlikely combination, but somehow it worked, even as they mined an area none had gone into before, and they continued to do so with a fair amount of both artistic and commercial success until 1982, continually challenging the stereotype of what made up “rock music.”

Plenty of other groups fall handily into the post-punk category, such as the Mekons, the Fall, the Slits, and even the early Cure. The fact that the music didn’t have to conform to a particular ideal gave room for plenty of experimentation, and the darker matter of the lyrics meant it was a bridge between the early questing of punk and the black eyeliner that would be Goth a few years later.

It was one of those few windows in pop music when anything went, and the barriers were down. You could argue that U2, who’ve gone on to become one of the world’s biggest bands, started out as a post-punk group, working a sound around the identifiable guitar work of The Edge and the voice of Bono; certainly their first two albums fit within the category, before they went for a much bigger stadium sound. But it was an era of freedom that couldn’t last long, as the eagerness for new sounds continued.