The Story of Rough Trade 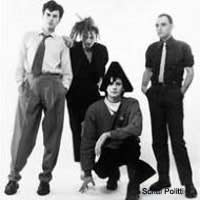 The story of Rough Trade is one that illustrates how a small independent label can become an influential force in music. What brought it to that position was its insistence on only releasing good music, and refusing to be stereotyped by any musical style. From the Smiths to Robert Wyatt, it effectively became a brand in itself, in a manner few labels achieve, where the mere fact of a record appearing on Rough Trade became a recommendation.

Rough Trade actually started life as a record shop of the same name (and remains one, with two branches now in London). It had been founded by Geoff Travis after he’d returned broke from a trip to America, but with a good collection of LPs. To keep body and soul together, he opened a record shop in Notting Hill, long before it became a trendy area.

It was frequented by musicians and music fans, many of whom had their own records they wanted Travis to sell in the shop, which had become a gathering place for the West London musical community.

Things grew quite organically. Informally, Rough Trade began supplying records to other shops around the country, and even a few in America, which proved to be the birth of Rough Trade Distribution. From there it was a natural step to set up a label.

The Early Years of the Label

From its beginning in 1978, the Rough Trade label was eclectic, a daring move in a time when the underground scene was dominated by the spare sounds of the post-punk era or the jangly perkiness of New Wave. So the experiments of Cabaret Voltaire stood proudly next to the eccentric poetry of Ivor Cutler in Rough Trade’s early catalogue, and the label’s reputation for experimentation was born.

Unusually, Rough Trade ran as a collective, with the artists involved in the daily running of the label. Instead of the usual royalties, they received an unprecedented 50% of the profits on their records, far more than on most other labels. In many ways it was a way of transplanting the ideals of the 1960s into a new era, but overall it worked surprisingly well.

The label truly found its niche in the 1980s as it released music by Scritti Politti, Robert Wyatt and the Smiths, continuing its policy of great diversity. Commercially, the Smiths were the high point. Signed for a mere £4,000, they became a huge source of profit for the label until they finally migrated to EMI.

This was the time when bands wanted to be associated with Rough Trade, and when the quality of releases were at their highest, and often most adventurous. But success brought its own problems.

Rough Trade had run on a day-to-day basis for several years, with no real long term business plan. But now, as it has become one of the larger forces outside the vice grip of the major labels, it was necessary to begin thinking ahead and working out how the label could be a self-sustaining, profitable entity.

The solution was to part the three strands that made up Rough Trade. Travis gave the shop to the employees, and the label and distribution wings were separated on the advice of consultants, with the company moving from being a co-operative to a more traditional structure. It proved to be a fatal decision.

The label continued to do well, but grave mismanagement meant the distribution arm began leaking money like a sieve. By 1991 the situation was so bad that Rough Trade entered receivership and Travis was forced to sell the label’s back catalogue to pay off debts, a great artistic loss. It seemed as if Rough Trade would be no more.

It took eight years for Travis to be able to buy back the Rough Trade name and re-start the label. But his savvy and taste hadn’t suffered in the interim. With artists like the Libertines, the Strokes and Babyshambles, as well as the feted return of Scritti Politti, he’s chosen good artists who’ve achieved both critical and commercial success. Moreover, Rough Trade continues to be a beacon at a time when working independently, especially on downloads, has become more important than ever before.