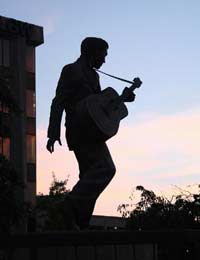 There are probably as many different opinions about the greatest rock bands as there are people who listen to rock music. Much of it is bound to be subjective. But there are some who stand above popularity and above their own time to be gigantic artists in music. Putting them into any kind of order is a different matter.

What makes an artist truly great? Much of it is innovation and influence. They bring something new and different to the form of rock music, and influence others. Not just those immediately around them, but those who come after – often not even immediately after, but a few years or decades, not that rock music has a history behind it. They might not even be bands, although that’s the standard form; there are individuals who’ve had a huge effect on music.

Although rock music existed before Elvis, in many ways he was where it all came together with the magnificent sides he cut for Sun Records in 1954 and 1955. Blues and county rolled with a howl and parents were outraged – even more when they saw him moving his hips lasciviously on TV. Pouty and good-looking, he wasn’t rebellious, but a generation found a rally cry in his early music.

If Elvis was the voice of rock, Chuck Berry was its poet. He took a standard blues 12-bar form, added a signature guitar lick and duck walk, and words that expressed teenage passion, from “Maybelline” to “Memphis, Tennessee” to the rock band classic, “Johnny B. Goode” – he told complex stories in simple but wonderful rhyming couplets over a hot beat. It was perfect.

For many, any list of rock bands has to be topped by the Beatles, and certainly no one has come close to their influence. They took an American form and built on it, creating music that’s stood the test of time. They progressed at amazing speed – remember, they only recorded for eight years - but bands are still catching up to what they achieved in a short time.

They were dirty and bluesy, and for a while acknowledged as the greatest rock band in the world. Although the elder Stones can’t recapture the fire of their ‘60s and ’70 selves, that time was thoroughly caught on disc and film. They aimed to shock and succeeded, but they also caught the angst of the period, on political and personal levels.

Punk was a necessary fire under a bankrupt music establishment, and the Sex Pistols were one of its great rock bands. They were short-lived and nihilistic, a perfect summation of the ethos. “God Save The Queen” made an ideal alternative anthem in the Jubilee Year, and their only real album packed a knockout punch that still rings around the world.

The Clash were the Beatles’ to the Pistols’ Stones, more eloquent, more adept, bringing in reggae, hip-hop and more over several years to create a daunting legacy of fire and brilliant music. In the late ‘70s there wasn’t a rock band to top them, as the London Calling album showed – ambitious, sprawling, but wonderfully powerful.

Grunge was already old news when Nirvana hit big in 1991, but somehow their weary lyrics and loud/soft dynamic captured the spirit on Generation X youth. They took the grunge sound one step further, making it more personal, with words that struck close to the bone, all coming to an abrupt end in 1994 with Kurt Cobain’s suicide.

From “Space Oddity” onwards, Bowie has been a unique talent, changing his colours regularly. His glory days might be long past, but from Ziggy Stardust through into the 1980s he made music that was ahead of its time, from glam to grounded to otherwordly, and it still speaks very loudly to new generations.

Did heavy metal really exist before Sabbath? Maybe, but they transformed it, inspiring at least two generations of metal rock bands with dips into the occult, loud and fast guitar solos and a multitude of riffs – not to mention the occasional acoustic guitar piece and a charismatic frontman. They really created the template that’s still in use.

Virtually all rocks bands in existence today owe a debt of some sort to Zeppelin. They extended the rock music form, using blues as a springboard for loud rock’n’roll. Helmed by a guitar god and a voice that became iconic, they were the roots of the future, and their enduring popularity demonstrates their massive influence.