The Impact of Oasis On The 90s Music Scene 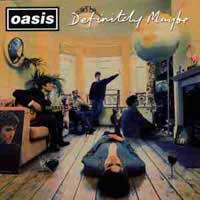 Arguably the most successful British group in a couple of decades Manchester’s Oasis helped take the sound of Britpop global, finding huge fame with what was essentially “classic” pop music, influenced heavily by the sounds of the 1960s, especially that of Lennon and McCartney.

Although Noel Gallagher is the leader of the group and its main songwriter, he was actually the last member of Oasis. The band had been formed in 1991 by his younger brother, Liam, and Noel was working as a roadie for indie band Inspiral Carpets. He was asked to join the band, and agreed on the provision he became the sole songwriter, as he wasn’t impressed by their original material.

Their big break came in 1993, when they were spotted at a gig in Glasgow by the owner of Creation Records, who promptly signed them to his label.

It took three singles before Oasis cracked the top ten, but by the time their debut album, Definitely Maybe, appeared in September 1994, the public was ready for them, as the CD crashed into the charts taking the top spot and was, at the time, the fastest-selling debut in chart history, catapulting them to stardom.

Fame took them to America, and brought the first of many well-publicised arguments between the two brothers, and speculation that the group wouldn’t continue. They managed to overcome their differences, however, and went back into the studio to make a follow-up disc.

Their first number one came with Some Might Say, and with Britpop at its height, they were pitched directly against rivals Blur when both bands released singles on the same day, and Oasis’ Roll With It lost out. But their sophomore CD, (What’s The Story) Morning Glory? took them to new commercial heights, with over 19 million copies sold globally, and two more massive hit singles. It was also a large success in America.

There were personnel changes in the band (the Gallagher brothers are the only constant members), which may have affected the sound. Certainly the third album, Be Here Now had none of the quality of its predecessors. It still sold well, but damaged the group’s reputation – and 2000’s Standing on the Shoulder of Giants did little to rescue it, although Noel Gallagher had now overcome the drug problems which had dogged him for a couple of years.

Musically it had a more psychedelic flavour that didn’t sit well with fans or critics – or even with the band themselves. The tours that followed its release continued to be fraught with incidents from arguments to outright fights, which remained the case as they played shows following the next disc, Heathen Chemistry, in 2002.

The album reflected the new, more stable lineup, with every member writing songs for once.

It took three years before they managed another record, Don’t Believe the Truth in 2005, but artistically it was worth the wait. After so many lacklustre discs, they’d delivered what was generally accepted as their best album in a decade, which gave them two more number one singles, and meant that 2006’s Stop the Clocks, a greatest hits collection, really did bring together many top hits.