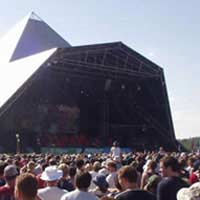 Festivals have been part of the summer musical landscape in Britain since the start of the 1970s although after an initial burst, for much of that decade they were sporadic events.

Even during the 1980s and the beginning of the 1990s, it was only the dedicated who braved the weather at Glastonbury. But by the middle of the 1990s, following the popularity of large gatherings at raves, festivals suddenly became great business again. Glastonbury started a dedicated dance tent to accommodate those who came for the young dance acts on the bill, and the resurgence of rock saw thousands arriving to see bands from Britain and abroad.

But with Reading, V and others, the festivals surged in audiences, and became major landmark events on the calendar. Whilst no one could predict the British weather, people enjoyed themselves anyway.

With its eclectic mix of music and many stages to cater to different tastes, Glastonbury is the king of festivals, having been going and growing since 1979, with only a few breaks (there had been two, much smaller, events at the beginning of the ‘70s). Some years, festival goers found themselves going home drenched in mud, especially in 1997 and 2005, but it remains common for well over 100,000 people to attend the event, and for tickets to sell out within a day.

The festival is held four years out of five, with a break for local residents (and the land), and virtually every major name in music, from pop to rock to indie has played there, with an invitation to headline the main stage a sure sign the act is at the top of its game.

The Reading festival also began in the 1970s, and chugged along until the 1990s, its future often in doubt. But it was re-invented in the 1990s as the festival home of indie music, getting all the important names from Britain and America on its bills.

By the end of the 1990s it had grown so popular that it needed to expand. A solution was found by adding another site, some 200 miles away in Leeds. Initially bands would play Reading one day and Leeds the next (and vice versa), meaning both audiences saw the full bill.

Whilst Glastonbury is a very rounded festival with wide appeal, Reading and Leeds (now known as the Carling festival) go much more for a rock and indie audience.

The V Festival began in Chelmsford in 1995. The original idea was one taken up later by Reading – one stage in the South, the other in the North. Warrington was the first Northern site, then Leeds, before it became part of the Reading festival. Since 1998, though, it’s been held in Chelmsford and Weston Park in Staffordshire

It’s tried to become another Reading, with a diverse line up, and in that it’s largely succeeded; in 2006 it drew a crowd of 158,000 to the two venues.

These are the biggest events, but there are other, smaller ones, and within folk music, the entire spring and summer is one long festival season, whilst the WOMAD world music festival has grown to the point where it was forced to seek a larger home.