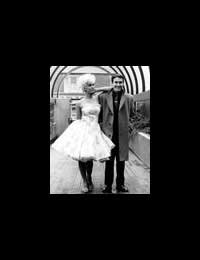 Each decade of British rock has enjoyed its defining music television programmes. In the 1950s it was 6.5 Special, the ‘60s had Ready Steady Go and the ‘70s had enjoyed the Old Grey Whistle Test. For the 1980s, the music programme that helped shape the taste of millions was The Tube. Like its predecessors it has its own style, its brashness a reflection of the times. The show made stars of its presenters, former Squeeze keyboard player Jools Holland and Paula Yates, a one-time model and music journalist. From 1982 to 1987 the Channel 4 show was the place to see new music.

In essence, The Tube (which was named for the canopy leading into the Tyne Tees studios in Newcastle, where the programme was made) only built a little on what previous shows had done. There were live sessions and interviews, as well as a music feature. The biggest innovation was the use of videos, which had become part of the musical landscape after the introduction on MTV. To show that the worlds of music and alternative comedy shared a common feeling, from time to time young comics would also be featured (and on the other side of the coin, each week the 1980s alternative sitcom The Young Ones would feature a band playing live in its story).

As with any music programme, the studio guests consisted of a mix of the famous and the up-and-coming, who were hoping the show would be a springboard to fame. So, for every Wham! or Duran Duran, there was a Fatal Charm and Scraping Foetus Off The Wheel or an Aztec Camera and Mission.

Although the focus was very much on contemporary music, the range was wide. The show could easily encompass the hard rock of Thin Lizzy or the soulful pop of Simply Red. Indeed, that was part of its charm – it quite deliberately didn’t focus on any single style but embraced the full range of pop and rock during the 1980s.

Holland and Yates were the show’s linchpins. A very talent pianist, Holland could appreciate and discuss the music (and as he’s shown in his own show, Later With…, he could also fit in with his guests quite easily), whilst Yates, who was perhaps chosen for her appearance and sensual qualities, could flirt outrageously with the male guests during interviews. Although the pair seemed an unlikely combination, they worked well together, and the show revolved around their personalities almost as much it did around the music. Muriel Gray, the third, more serious presenter, went on to a media career, running a production company and publishing horror novels.

The show ground to a halt in 1987. The catalyst came when Holland swore during a trailer for the show that was broadcast live on children’s television, causing a national outcry, which resulted in the show being suspended for three weeks. Towards the end of the fifth season of The Tube, its producer quit, and the show wasn’t renewed.

It had made a huge contribution to popularising modern music, but after five years it had largely outlived its usefulness. Its reputation has lived on, however, and it came back, not on TV but as a radio station online, still run by Channel 4.